I got tagged three times during my hiatus, but first I need to do this tag as it is a linkup and it is part of an event that happens every February I believe. So yes. This is important to do before the end of February. 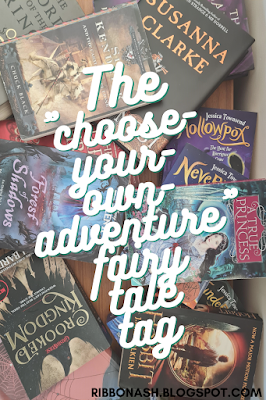 (Can you spot all of the books in this picture? Also do you prefer several books spread out or a close-up picture of one book? Feedback is welcome!)

This tag was created by Fairy Tale Central and here is the original post.

1. Your father the king has declared a contest for your hand in marriage. But he's allowing you to decide what kind of competition it will be. What do you choose? Is there a penalty for losing, or do the losers just go home while the winner remains to marry you?

I would love to have a competition like in An Uncertain Choice by Jody Hedlund. (Don't know what I'm talking about, read the book. It is good.) And yes, the losers would be allowed to just go home.

2. You've just been told that you're the Chosen One - the heir to your kingdom's throne. Of course you demanded proof, but you didn't expect quite so much of it to be bought forward. You grudgingly ask the state of the land. Your kingdom is at war with two neighboring kingdoms, a third kingdom is expecting your kingdom to ally with theirs and help them fight in agreement with old treaty, there is famine in two countries in the north, and the barons of the kingdom are fighting over who will supply the palace with food for the next year. What do you do first?

I will ally with this third kingdom first and end the fight about this treaty thing, use this kingdom to help me win the war with the other two kingdoms, get the barons to provide their food to the countries with the famine, and let them both supply the palace equally with the leftover food after giving to the countries that actually need the food.

3. You've set off to find your fortune but end up caught in a storm in the middle of the night in an enchanted forest...and there's an ominous growl emitting from the trees. A warm looking cottage sits nearby but you've heard that questionable figures dwell in this wood. What's your plan of action?

Don't go inside the cottage and walk away from the area where the growl came from. I'll just find a tree and hang out there to wait out the storm and hope that I don't come across anything else questionable (especially in my tree).

4. It is time to christen your dear new baby. It's expected to invite the local fairies but they're known for "gifting" babies with less-than-desirable characteristics (Ella Enchanted-style). Do you invite them anyway or "accidentally" forget to send out an invitation and risk the wrath of the petty (but powerful) fairy-kind upon your kingdom?

I will invite them anyway and hope that they don't mess up my baby too much.

The dress with the colour of the silver moon. This one appeals to me the most because it is my sort of colour but also not too bright or flashy (they are all bright and flashy but this one is the less so in my opinion).

6. Your cursed beloved tells you that only when he marries a true-blood princess will he be set free. Do you choose to aid him by finding a princess that can set him free from his horrible curse? Or do you visit the witch of the forest and make a deal to become a princess - but you will only get to be with your prince one day a year.

Well, both of these choices suck. Can I just break up with my beloved and let him find the princess on his own (while crying myself asleep)? Cause let's be honest, even though the witch option is better, it is so painful and I might as well not be with my prince.

7. You've just completed a fairy tale adventure worthy to join the ranks of the world's greatest legends. Alas, the kingdom's most famous minstrel is also notorious for adding his own embellishments. Would you rather have your story lost to the world, your name and deeds forgotten, or to be known as a hero throughout the land...just in a very inaccurate and mangled version of the story?

Yeah, I can deal with the minstrel messing up my story, so I'll pick that. But I'll also hire a scribe and ask him write down the real story.

8. You've just been approached by a man in a pointy hat who says you're the chosen one destined to save a magical world. Before you enter the portal to this new world, you are allowed to take one piece of modern technology with you. What do you choose?

A flashlight (Narnia anyone?).

9. Your parents have angered a powerful witch in your land, and she has chosen to strike out at you to punish your parents. However, since you weren't the one who actually angered her, she's letting you choose your own fate: 1) sleep for 100 years and leave your parents to die of old age while you sleep, 2) be locked alone in a faraway tower so your parents will never find you, 3) lose your voice so you'll never be able to speak to your parents, or 4) give you a fatal golden touch so that you can't hug your parents lest you turn them into statutes.

Okay, I'll choose to lose my voice, but I will learn to write really well so I can still communicate (I express myself better through writing anyway. I just need to learn the words I can say but can't spell 😂).

10. You just found out that you have a twin, and you two were separated from birth because an ancient prophecy claimed one of you would bring would bring ruin upon the kingdom. Are you the prophesied twin of ruin, or is it your brother/sister? How do you figure it out, and what do you and your twin to do about it?

It doesn't matter who is the one who brings ruin, because we will forsake everything we know and bring ruin together. I won't leave them to their fate being the evil one all alone and they will do the same for me. We will tear down this kingdom together.

I hope you guys enjoyed this and I will see you with the next tag!

Go forth into your day, Virtual Paper Adventurers!

How would you choose with these choices?